No matter how traditional a guitarist wants to be, companies keep coming out with weird and wonderful tech for us to at least try, and no more than literally everything else, that increasingly means our phone will be involved.

I know what I like: valve amps, analog pedals, mahogany bodies with humbuckers… but I have apps on my phone for tuning, a metronome, zapping stored settings at my delay pedal, and I’ve even recorded multi-track demos on my phone.

While not the first pedal released for you to use with your phone, [easyazon_link identifier=”B01FIKU1WI” locale=”US” tag=”reviewing-20″]Hotone[/easyazon_link] seem to be the company making the most effort to push the smartphone/pedal, or smartpedal as I’ve just decided it shall henceforth be known (I Googled it; nobody else is using it; I invented it, I called it) to front and centre of their business.

The thing about this pedal is that it’s not really a single pedal, or a multi-effects pedal either. It’s somewhere in between, so the regular specs that you’d associate with pedals are gone completely out the window.

Here are the usual things you’d look for in a pedal.

Just looking through the rest of Hotone’s catalog and it becomes fairly evident that cramming lots into a small amount of pedalboard space is very much their thing.

The Xtomp has a metal casing in which it stores its magic. On top, it has a single footswitch, and six knobs to control the parameters of the effect. What the sic knobs actually control depends on the effect selected. On some, they won’t do anything at all.

This compact pedal has two inputs and two outputs for connecting to instruments and amps/PAs/audio interaces/whatever. Again, what they do will depend on what effect you have selected. It also has your mains connection, and USB connection for updating firmware.

The one thing that’s suggested by the parts listed here, is that it will be very easy to use. This is a sensible approach. If you’re trying to win market share from traditionalists, keeping things as simple as possible is exactly what you need to do.

All of these bits and pieces are held together in a metal casing. Yes, it’s highly reminiscent of a smartphone. Is that a good thing or a bad thing? I’m starting to feel like it’s just a contemporary design trend for literally everything. t would have been nice to see Hotone push the boundaries with something a little less generic and clinical. It’s kind of funny: the Xtomp is a device that so clearly takes its design cues from smartphones. We all know what smartphones are like. We certainly wouldn’t put them on the floor of a dirty, sticky, beer-drenched stage… to stand on them! That’s nuts!

You have to really look closely at it, and take it in your hands to get a feel for it before you’d be comfortable putting your hoof on it. The clinical smartphone look is actually very misleading: like any other Hotone product, it’s made of metal, and feels surprisingly sturdy in your hand.

That’s a relief. I’d still be intrigued to see what kind of condition it would be in after maybe a year of being gigged every week.

I guess it might win over more old school players if it actually looked like a stomp box rather than a smartphone. First impressions and all that jazz.

There are metal nuts on the jack plugs, which also contribute to the general feel of robust construction Hotone seem to be going for.

In terms of the layout of the pedal, everything is logically placed. There are no surprises: the simplicity of the pedals that have gone before have been retained. 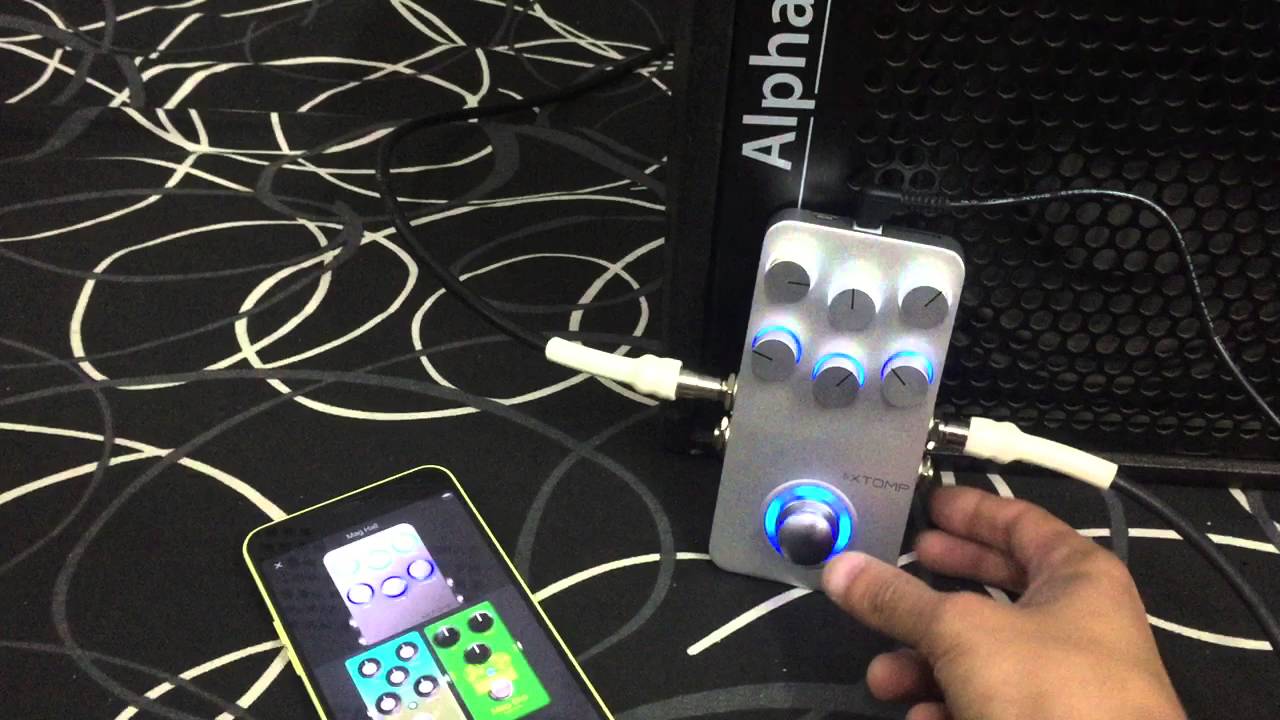 I mentioned earlier about the Xtomp being a hybrid between a multi-effects unit and a stomp box.

That’s because while you can make it perform like any of the 300+ effects in the library, similar to a multi-effects unit. But, sneakily, and not the most prominent point in the communications, you can only use one effect at a time, just like a stomp box.

It would be impossible for me to go through each of the 300+ effects available in the Xtomp’s library, so an overview will have to do for now.

Going through the list of effects in the Xtomp website, for the most part, it’s a case of the usual suspects. The amp and cab models include inspiration from Marshalls and Fenders, and everything in between and beyond.

Looking at the list of available effects, and again, it’s a predictable list with thinly veiled name changes to acknowledge the inspiration from classic pedals like the Tube Screamer, Phase 90 and Small Clone.

I had a play through a few of the effects, and while they sounded absolutely fine, you can’t get away from the fact that they’re digital emulations, and will always lack the warmth of their original analog counterparts.

The amps might be find if you’re recording directly into an audio interface, but again, the best recorded guitar sounds come from a good amp going through a good mic. A digital recreation of the generic sound is missing the point completely.

In terms of using an Xtomp, it couldn’t be any easier. You pick the effect you want on the accompanying app, zap it at the pedal, and voila! You have a new pedal!

Even the purest, most traditional, most old school of guitarists can’t argue with how simple that is.

As with any other kind of multi-effects unit, the only limit to the playability of an Xtomp is the player. It will take a while for somebody to go through the current list of effects in the library, and as that list increases, so do the possibilities of what can be played.

When I was talking about the smartphone-esque construction of the the pedal, I mentioned that I’d like to see the state of one of these pedals after a year on the road. As well as that being a sufficient time period to really understand whether or not this is cut out for a life on the road in terms of durability, it would help understand what it might mean for functionality too.

As the library of the Xtomp continues to grow, it means that the possibilities associated with the pedal are infinite.

If you’re somebody who goes through pedals like who know what, you will save yourself a bunch of money by having at least one [easyazon_link identifier=”B01FIKU1WI” locale=”US” tag=”reviewing-20″]Xtomp[/easyazon_link] on your board: instead of losing a bunch of dollars every time you sell a pedal to fund a new one, you can literally just point your phone at a pedal.

Sure, the compromise of digital will be off-putting for some, but you can get a pedal designed to soften the harshness of digital tones to get it back towards a warm analog thing.

While you’re here, be sure to check out our other popular reviews on Sun Basket and Stitch Fix!

A weird and wonderful box