Time to fly away!

buy it now
User Rating: Be the first one !

Since humans can’t fly yet, what’s the next best thing? Flying some really cool looking drones! Pictured above is the Holy Stone U818A HD+ RC Quadcopter Drone. Sounds complicated? I bet you think it’s expensive? What if I told you that the drone is under $100? That’s a pretty steep drop from the typical pricing of high end camera drones such as the DJI Phantom 3 Professional Quadcopter 4K which sells for a staggering price of $1,127.00!

This past weekend I decided to take the plunge and pick up the drone by Holy Stone and give it a wirl. Here it is out of the box: Right off the bat I was able to tell that the drone is a light weight drone but built sturdily. You can also see from the picture that it’s not a huge drone, but that’s great – if you’re a beginner, then starting with a smaller drone is better.

Let’s talk about the flying ability right away. So a single battery will give you about 7-9 minutes of flying time. It does take 100 minutes for you to fully charge the battery though. Luckily Holy Stone does include an extra battery so if you want to get 20 minutes of flying time in one session, you can definitely do so without splurging any extra money on additional batteries. In terms of flying, the drone was quite stable, even for beginner! The fact that it has 6 axis quadcopter means it beginner friendly.

Flying the drone in the a nearly windless environment is perfect, but if there are 10-15 mph winds, then it’s best to not even try. The drone is light weight, and the motor  is simply not powerful enough to battle such winds. A nice feature of the drone that I did enjoy was the “come back home” feature which is basically where you click a single button on your controller, and your drone will simply fly right back into your hands without you doing a single thing.

Last but not least, lets talk about the camera. The drone does have with a built in 2MP HD video camera which records at 30 frames per second. I’ve recorded a fully video of my experience with the drone and also the drone camera quality, so feel free to watch the video at the top of this post.

Overall, I loved the device. But I did feel that the microphone on the drone is near useless considering all you can really hear all the electronic motors, so keep that in mind.

At the end of the day, if you’re looking for an affordable drone, then the Holy Stone drone is a great selection. They even include several replacement parts, which trust me, you will be putting to use after just a few flights, hah! 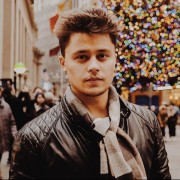